Meet Gillian Anderson near Cardiff, Wales on the set of her forthcoming Netflix series Sex Education. You and a friend will spend time on set watching Gillian film scenes and discover all that goes on behind the scenes with the making of a television series.

Due to Gillian’s production schedule, the set visit must take place between 2nd July – 13th July 2018. You and your guest can take 1 photo with Gillian and you may bring 1 item for her to sign!

In aid of: SA-YES: South African Youth Education for Sustainability

Gillian wrote a guest blog on PETA for International Women’s Day (March 8), which also features a new version of the ad that appeared during New York Fashion Week last month.

This is me. Naked. See that scar? Three children came out of there. And that “P”? That’s for Piper, my eldest—a tattoo to cover another scar from an ectopic pregnancy. That’s part of the story written on my body. Had the lens been wider, you’d have seen a scar from the time I kneeled on a shard of glass during a production of A Streetcar Named Desire in London. And if I’d turned sideways, you’d have been able to see lots and lots of cellulite and a mole in the shape of a continent. This is my body. It’s mine to do with as I please. And today, I’m using it to stand up for animals and their right to exist as they please—with their skin still attached, naturally.

My nakedness also makes a bigger statement. As an actor who is usually unusually modest, suddenly I find myself concerned that modern feminism has too many people confusing sexy with sexist. It’s easy to forget that, in the annals of activism, there is a history of women protesting naked, which has had little to do with being directly sexy and is ultimately about freedom of expression. Remember Lady Godiva, who rode nude to protest for peasants? And more recently, Cambridge economist Victoria Bateman appeared topless with “Brexit Leaves Britain Naked” written across her torso. I’m not that brave.

But I am in favor of doing whatever the fuck we want with our bodies to make a statement that is important to us.

This is my body. If I were clothed, would you be reading this?

Gillian Anderson is an Emmy, Screen Actors Guild, and Golden Globe award winner. She is also the co-author, with activist and author Jennifer Nadel, of We: A Manifesto for Women Everywhere (out now in paperback from Atria Books).

Gillian Anderson is joining the growing flock of celebrities who would “rather go naked than wear fur.” And The X-Files star proved just that in PETA‘s latest campaign aiming to prevent the cruel treatment of animals in the fashion industry and beyond.

The Emmy winner wears nothing but a pair of costume cat ears and a huge smile in PETA’s newest ad, which will be featured on a 70-foot billboard hanging over Penn Station during New York Fashion Week this month.

“I found it liberating to use my body to make an important statement,” Anderson, 49, says of teaming with PETA for the powerful photo shoot. “People tend to look away from anti-fur ads showing mangled animals, but they’re drawn to PETA’s ‘naked’ campaign, and I’m proud to be a part of it.”

In the past, stars like Pink and Taraji P. Henson have stripped down for PETA’s fashion week ads to protest the use of fur on the runway.

Just in case fans haven’t seen this on Twitter; Gillian was recently rewarded with a Honorary Fellowship by the UCL Institute of Education (IOE) for her continued support & contribution to their Reading Recovery programme.

Gillian Anderson @GillianA has been awarded a @UCL Honorary Fellowship for her support of the @ILC_IOE's #ReadingRecovery programme. pic.twitter.com/ESJivN4yLA

Juliet Stevenson, Gillian Anderson, Jarvis Cocker, Edith Bowman, Jamie Cullum and Michael Palin are among the first star-studded wave of names to be announced for this year’s Letters Live.

The popular live celebration of literary correspondence returns for another residency at London’s iconic Freemasons’ Hall from 4 to 8 October, with tickets currently on sale.

Inspired by Shaun Usher’s international best-selling Letters of Note series and Simon Garfield’s To The Letter, Letters Live has moved audiences both to laughter and tears through a series of heartfelt, humorous and at times, heartbreaking letters, delivered by acclaimed talent from the world of arts and culture.

True to the spirit of Letters Live, each show’s line up remains a closely guarded secret until the curtain call, promising a unique and memorable evening of unearthed letters and dazzling performances.

This year, Letters Live is supporting the charities Ministry of Stories, First Story and Help Refugees.

Jamie Byng, CEO of Canongate Books and a director of Letters Live, said” “This third run of Letters Live shows to be held here in London looks set to be as memorable as anything we have ever done.

“The combination of great talent, remarkable letters, three important charities, packed houses and an amazing venue, should result in five unforgettable evenings that celebrate the humble letter and its immense power. Every night is unique.”

As we know a couple of days ago Gillian took part to the Letters Live reading event. Take a look for photos in the gallery!

After their turns reading the words of Alan Turing, Katharine Hepburn and Che Guevara respectively, Benedict Cumberbatch, Gillian Anderson and Russell Brand are returning to perform at Letters Live in March.

Letters Live is a “celebration of the enduring power of literary correspondence” started by independent publisher Canongate after the success of Shaun Usher’s bestselling book Letters of Note. After a sellout run in 2015, it has been established as annual event in which performers read letters from famous people and historical moments, with the line-up remaining secret until the event starts.

During the 2015 run, letters from individuals including David Bowie, Marge Simpson, Gandhi, Elvis Presley, Richard Burton and Che Guevara were featured. Cumberbatch read a letter from the mathematician Alan Turing, whom he played in the film The Imitation Game, while Brand read a letter from Argentine revolutionary Che Guevara, addressed to his children.

Gillian Anderson said she was “delighted to return to the Letters Live stage”, while Cumberbatch said, “It’s a privilege to read this most ancient of communications live to an audience and it’s a truly inspiring event to be a part of.” 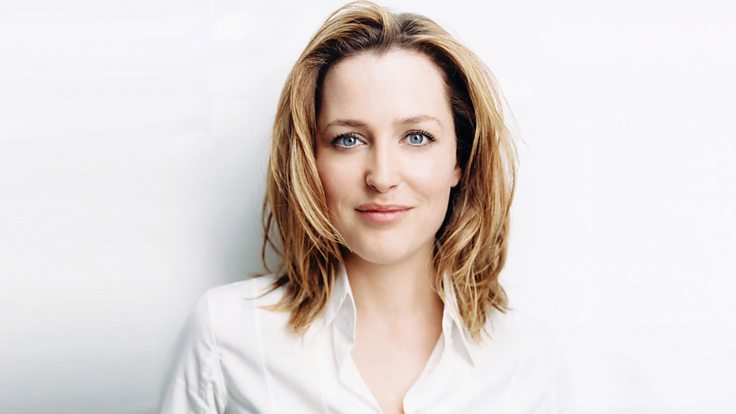 Listen to the audio at www.bbc.co.uk

Today UCL celebrated the start of its 2016 Reading Recovery Read Aloud (Read Aloud) campaign, which is being led by the International Literacy Centre (ILC) based at the UCL Institute of Education (IOE), to raise awareness of literacy issues of school children.

Actor Gillian Anderson joined pupils and teachers at the William Tyndale Primary School in Islington, London to listen to students demonstrate how their reading skills have improved as a result of working with the ILC and its Reading Recovery programme.   The visit was also attended by UCL President and Provost, Professor Michael Arthur, and Interim Director of the IOE, Professor Andrew Brown who also spent time listening to children reading.

Alongside Gillian, Gareth Bale and Janet Street-Porter are also champions of the campaign which was launched last year. Read Aloud gained so much support in 2015 – with contributions also from Little Mix, Sir Quentin Blake, and Sir Tony Robinson – that this year’s campaign will run for the whole of February with a series of events, continuing onto March when ITV CEO Adam Crozier will listen to children read at their studios.

Gillian said: “Being able to read and enjoy books is such a vital skill for children to acquire, and is crucial to their life chances. It’s an honour to be able to support Reading Recovery Read Aloud, and to witness first-hand how children such as those at William Tyndale Primary School have benefited from the work done by the International Literacy Centre. These children have not just learned to read, they now have the confidence to let their voice be heard.”

The 45-year-old actress, who played Scully on the cult TV show, bared all apart from the massive sea creature which helped protect her modesty. The eye-catching picture, published today, was taken to support Fishlove – a campaign against deep-sea trawling in European waters. The revealing image was part of a collection taken by French portrait photographer Denis Rouvre.

Other celebrities who also stripped off for the camera included actress Olivia Williams and rapper Goldie. Campaigners say deep sea fishing is washing out ecosystems the size of London every day. The images have been released ahead of a crucial vote on December 10 in the European Parliament to ban the practice.

Nicholas Röhl, who founded the campaign with actress Greta Scacchi, said: “What is really shocking is that deep sea fishing is wholly dependant on taxpayer’s money for its survival. “The practice is not only environmentally but also economically unsustainable.”

Campaigners have also launched a petition for those wishing to support the cause. It is looked to receive 10,000 signatures and send a messages to MEPs over deep sea fishing. To sign the petition click here.

Welcome to Radiant Gillian Anderson - a fansite dedicated to award winning American-British actress, Gillian Anderson. She is best known for her roles as Dana Scully in The X-Files, Stella Gibson in The Fall, and more recently, Jean Milburn in Sex Education.

Gillian has also appeared in several mini-series such as Moby Dick, Bleak House and Great Expectations. You might also recognise her from films such as The House of Mirth, Playing By Heart, and more recenty, The Spy Who Dumped Me.

This site is determined to bring you the most up to date information on this talented actress and her career. Enjoy your stay here!

The Sunlit Night 2020
Olyana
Set between New York City and the far north of Norway, The Sunlit Night follows American painter Frances and émigré Yasha as an unlikely pair who find each other in the Arctic circle. Frances has arrived to jumpstart her career while Yasha has come to bury his father in the land of the Vikings. Together under a sun that never quite sets, they bury the past and discover the future, and family, they didn't know they had.
Info News Photos IMDb Official

Sex Education 2019-2021
Jean Milburn
A teenage virgin who lives with his sex therapist mother teams up with a smart and edgy high school classmate to start their own health clinic.
Info News Photos IMDb Official

The Crown 2020
Margaret Thatcher
Follows the political rivalries and romance of Queen Elizabeth II's reign and the events that shaped the second half of the 20th century.
Info News Photos IMDb Official